What to do in and around Bamburgh (continued) 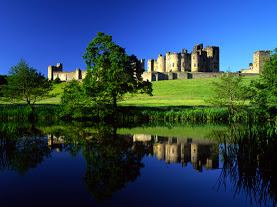 There has probably been a castle on this site for nearly a thousand years.  It is today one of the largest inhabited castles in Britain.

Alnwick Castle has been home to the Percy family for over 700 years and remains a family home today for the 12th Duke and Duchess and their four children.

The Percys, arriving from France with William the Conqueror in the 11th century, have been embroiled in the politics of the often bloody history of Britain, and the family is peppered with vivid characters.

Over the centuries the Percys have survived charges of treason, loss of land and property, rebellion, revolution, political intrigue, difficult economic circumstance and a rapidly changing social climate.  That these challenges have been met and overcome is testament to the astuteness, strong sense of purpose and vision of the family.

The Warrior
Harry Hotspur, son of the 1st Earl of Northumberland, was born at Alnwick Castle in 1364 or 1366. He was supremely powerful in combat on land and sea, though sometimes his hot-headedness could lead him into trouble. Leading lightening-quick strikes against the Scots in the borders gained Harry a fearsome reputation and the nickname ‘hotspur’.

He was immortalised by Shakespeare in his play King Henry IV (Part 1) and killed in battle fighting against that king.

The Strategist
Henry trod a careful path through the various conflicts, uprisings and usurpations of the late 15th century, famously holding back at the Battle of Bosworth thereby helping Henry VII to the throne. In enforcing this king’s policy on taxes, however, he was murdered by a mob near Thirsk.

The Blessed
Thomas lived through a period of great religious turmoil and upheaval, witnessing England’s split with the church of Rome. He rebelled against Queen Elizabeth I in ‘The Rising of the Northern Earls’ and was executed at York, professing the Catholic faith to the end, for which he was later beatified.

The Diplomat
Algernon Percy was a man of high principle, who steered a solitary path through the mire of the English Civil War. He was also a connoisseur and patron of fine art, who laid the foundation of the collection today.

The Romantic
Elizabeth Percy was responsible for Alnwick Castle becoming a family residence. Her romantic ideas about her ‘braw rough ancestors’ and her passion for the castle and landscape were matched by the vision of her husband, Sir Hugh Smithson. Together they restored Alnwick Castle and transformed the surrounding countryside.

The Enlightened
Algernon served in the navy from age 12 to 23, going on to become a great traveller and explorer. On inheriting the dukedom, aged 50, he had enjoyed a wealth of experience, with interests in astronomy, archaeology, art, architecture and technology, which influenced his restoration of the castle, improvement of the estates and numerous public benefactions.

The Wise
Hugh was duke of Northumberland for 48 years, serving with the Northumberland Hussars during the Second World War. In the harsh financial climate of post-war Britain, his judicious management of the estates provided great stability and continuity.

Ralph inherited the dukedom of Northumberland after the death of his elder brother in 1995. As well as managing the more traditional estate businesses of agriculture, forestry and minerals, the Duke has overseen expansion of the portfolio to include planning and development and commercial property. With his Duchess, Jane, they have developed Alnwick Castle as a significant visitor attraction while the Duchess has masterminded a garden renaissance in the creation of The Alnwick Garden.